The Passion of Kaspar Hauser 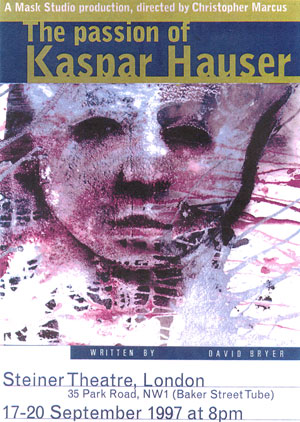 The Passion of Kaspar Hauser
a theatre play commissioned by the Mask Studio comprising a story-teller/actor, an actor/puppeteer, a hurdy-gurdy player, and a dancer.

The story:
A boy of 15 appeared one afternoon in May 1828 in a square in Nuremberg. He walked like a toddler who has just learnt to stand and spoke words he had been taught parrot-fashion but the meaning of which he did not understand. Unable to consume anything but plain bread and water, he is initially imprisoned as a vagabond. A teacher on sick leave undertakes his education and later, to save him from the cruelties of visitors who see him as a circus freak, takes him into his own home.

Once he learns to speak properly, Kaspar, as he comes to be called, describes how for as long as he could remember he had been kept chained so he could not stand in a dark room with just one small aperture for a window. He believed himself to be the only creature in the world.

After a year in his teacher's home, a masked man appears and attempts to kill him. He is removed to a more central location and thence to a guardian who seeks to protect him from the negative influences that beset him. However, an English lord arrives and succeeds in turning the boy's head and those of the city elders, who agree to the lord adopting him. Kaspar is then taken to a town some distance away from his Nuremberg friends and placed with a schoolmaster who is sceptical of Kaspar's story. The English lord then disappears promising to return for the boy and take him back with him to England. This never happens. Instead, on December 14th 1833 the boy is lured into a park where he is stabbed, dying three days later surrounded by officials trying to make him confess that he had stabbed himself.