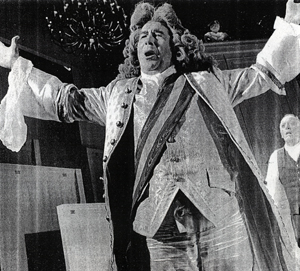 David Henry as Handel - behind Bill Stewart as Bach


'Handling Bach' is a light three-hander that imagines a meeting between the highly successful and worldly Handel and the poor and barely known Cantor of St Thomas' Church, Leipzig, Johann Sebastian Bach. The two never met in fact, despite being exact contemporaries, and despite strenuous efforts to do so on Bach's part. These efforts were thwarted on every occasion by Handel's equally strenuous efforts to avoid such a meeting.

Over a lavish dinner and with lashings of expensive wine, the reasons for the two composers' opposite wishes slowly emerge, to the accompaniment of some of their glorious compositions.


What the critics said:
"The English language has enabled David Bryer to give a natty title to his translation of Paul Barz's imaginary encounter between Handel and Bach … this is likeably acted, civilised entertainment, honouring the soul's nourishment and the pleasures of the table." - Jeremy Kingston in The Times, August 18th 1995


"The punning title given by David Bryer to his adapted translation … captures the light tone of Matthew Francis's charming production. Both text and performance do everything to contrast the composers." The Sunday Times, 3rd September 1995


"The dialogue is rip-roaring and the language colourful and often bawdy." East End Life. 4th September 1995


REVIVAL at the Edinburgh Festival

"Paul Barz’s play  translated by David Bryer is a comedy and a very funny one at that ... we enjoyed this immensely.” View from the Stalls – August 14th 2011


“David Bryer’s translation has been creatively staged with an in-the-round performance. Informative, educational and gently amusing, this two-hour piece is never less than entertaining.” Low Down – Tim Wilcock, 8th August 2011. 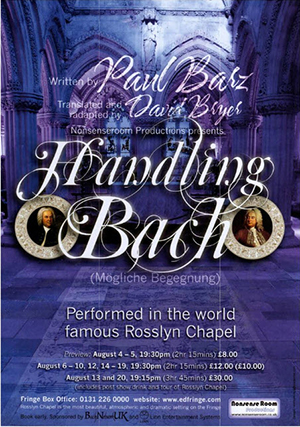